We all know that programming can be complicated. So let me explain to you how it all works. This article explains the real meaning of Modal and non modal G codes.

Modal means that once a command is issued it stays in the control.

How Can you Actually Use This?

If you issue a G0 or G00 command the machine is in rapid and you do not need to re-state it.

Rapid means all motors are flat out, like a teenager in a Ferrari.

Every move from then on will be a rapid move unless you tell it otherwise. The G code that changes it must be in the same group. For example G0 G1 G2 and G3 are all in the same group a bit like The Beatles used to be. The other day I was talking to  a “young person” who hadn’t even heard of the Beatles. I mean fuckin hell, am I really really old or are they doomed to be forgotten?

By the way my definition of a young person seems to get older every day.

Imagine being called a “young person”. You hear politicians on the telly saying “oh yes I was talking to one of those young people the other day”.

To be really honest I watch everything but in my defence I never stop complaining and throwing Pot Noodles at the TV.

My TV’s are covered in dents and scratched from various foreign bodies being thrown at them. Obviously I have a TV in every room and toilet.

I have five, toilets not TV’s. My mother said “you must use loads of water, not to mention lavatory paper”

Obviously I didn’t say toilet in front of my mother it’s always lavatory.

Oh Yea I Was Saying I Hate The Telly

I saw this thing on the Internet 8 huge Emmerdale Spoilers .

Now I know a lot of you CNC Programmers out there are big fans of the show but I got to say it.

Spoiler I mean how in the fuck can you spoil something that’s already a mind numbing piece of crap!!

When I hear the music to that show it gets me really enthusiastic about emptying the cat trays that are heaving with piss and shit. (I know your not supposed to leave them for over a week but in my defence I am getting into a routine now)

“Come on Dave the swearing gets worse, the Americans won’t like it” 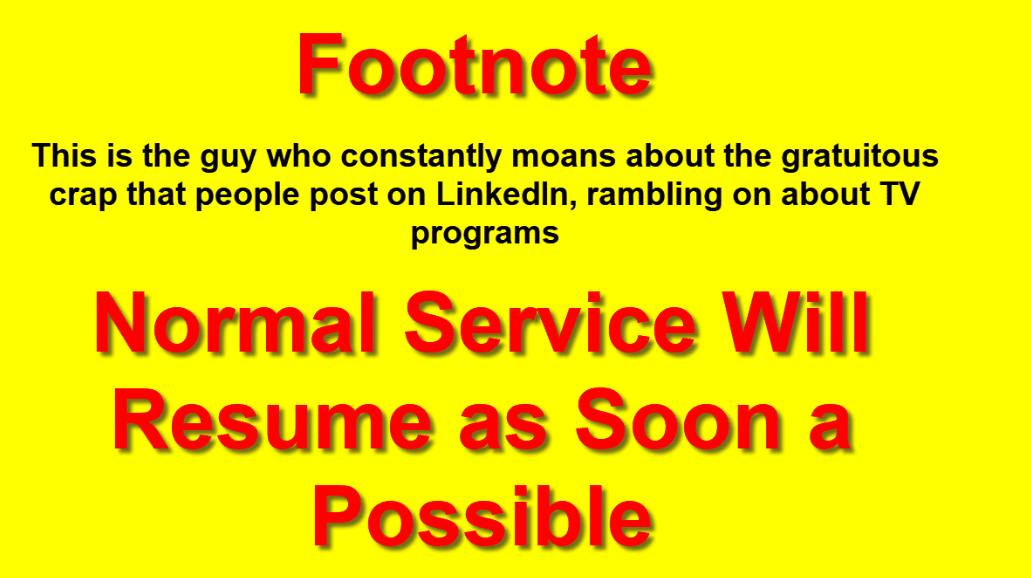 I admit this is a rant too far and I wouldn’t blame you for going to a different website.

This guy writes serious stuff about G Codes unfortunately for you, almost every post and video is full of mistakes and often blatantly wrong.

Anyway you deserve it for not sticking with me through  difficult times.

I shouldn’t say this but there are so many mistakes in these articles I don’t know how the fuck he gets away with it. Well that’s the Internet folks.

It is pretty obvious that these would have to replace one another because if you had them on the same line they would contradict one another.

You can’t go around a clockwise circle and in a straight line at the same time.

Modal and non modal G codes. How do they actually Work?

There are not many non modal commands G53 and G4

I remembers the G0 but conveniently forgets the G4.

My third wife was a bit like that she said I slapped her in the face but conveniently forgot that this was only after she kicked me in the bollocks and chopped off my left ear with a potato peeler.

The machine will do the G4 dwell and then completely forget it. If you really want another dwell you’d have to repeat the G4. Otherwise it’s like being told it’s your turn to feed the dog, the command is ignored.

Yes folks you can use X or P for a dwell command. I use X cos I love the feeling when the operator comes back to me n says “Dave you got this wrong”.

First of all I ignore him because my name is David and I don’t answer to Dave.

When he finally gets through to me, I love that feeling of power and superiority when I explain to him it works with P and X.

G53 is a machine position command.

If you use a non modal command you have to repeat it for every line you want to use it on.

What’s This all About?

This is what G codes are active when you turn on the control. Wake Up State, not to be confused with getting out of bed with a steaming hangover after a night on the piss.

This wake up state cannot be guaranteed as you can change this state by parameter.

There is also a parameter which controls what happens when you press the reset button. So for example pressing reset may cancel a canned cycle. (Or not).

Your modal G codes will change when……

These are not actually called modal but the same applies once you start the spindle (M3) you do not need to write it again until you want to stop or reverse it. M4 will start the spindle in reverse CCW. M5 will stop spindle.

No need to programme M05 just M5 will do try reading this.

Speeds are modal but your machine may wake up with a speed of zero.
So in MDI if a speed is active and you program M3 the spindle will start at the active speed (so be careful).

When you program just a speed the machine becomes a smart arse. It laughs at you saying “I’m not starting the spindle cos you didn’t ask me”

When I first started programming CNC machines in 1905 each program had loads of information at the beginning. None of us knew what it meant and no-one dared to alter it or take any of it out.

It could only be altered after a religious ceremony and a ritual slaughter when there was a full moon.

You could be fired on the spot for even talking about it.

The program on the right has wasted code. 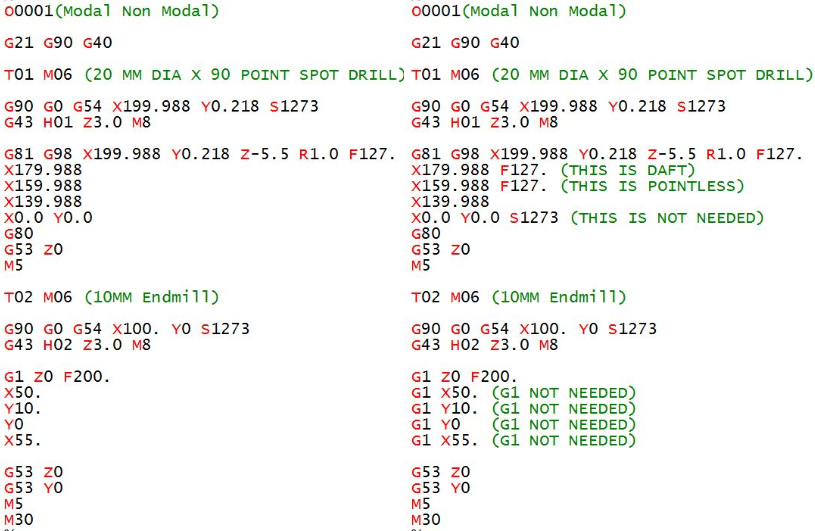 Oh and in the early day’s we often used to turn the machine off and back on again which usually sorted most problems.

No one knew why the fuck we did this but because it seemed to work we did it. Women often say why do men keep putting their hands down their pants. The answer is we don’t know but we do it anyway. Well I don’t know maybe you do.

Coming back to turning the machine off and on again. Imagine if you didn’t have a G50 in your CNC lathe program and it was set to a very low speed in another program that you had just been running.

You could wonder why you machine was running so slow. Obviosly if you turn the machine off this would reset. Everything would work fine again.

So let’s see how this works.

You may want to include this line at the beginning of your program as a standard thing.

Here is an article on well set out CNC Code.

Anyway if you must write a load of bollocks at the beginning of your program please learn what it means and what it is all for. Oh and don’t blame me when your fingers wear out.

If you are running short on memory these are things to look at. Some CAD systems will output loads of unnecessary shit but you need to sort your post processor to stop this. It’s quite easy to fix. Loads of leading and trailing zeros to get rid of.

Feed-rates are the same you only need to state them once and then again when you wish to change them.
It is best to state all of the modal information you require at the start of each section of code. Just after the tool change is the best place.

Try to program each tool as a section. Each tool should have all the necessary information to run on its own. Nothing should be assumed at the start of each tool. Oh and always take into account Modal and non modal G codes. But There is a Catch

Be careful when using MDI with Modal and non modal G codes as you do not know what G codes are active. All controls will have a screen displaying active G codes. There are loads of them on this screen, don’t worry if you don’t know what they all are (even Fanuc don’t really know, they’re just made up).

How Can you Actually Use This?

If for example in a section of program you have only one feed rate then that is all you will need to alter. If it’s repeated in several places (which your CAD system may do). Then you will need to remember to change each one.

Loads of articles on CNC Programming, enjoy yourself:

Zeros Not required on Haas Control

An introduction to Macro Programming

Just an Address will do…

Thanks for reading my article.

CNC Programming and Training on all controls and machines.