Help with CNC Productivity Improvements, to achieve massive reductions in set-up times and implement methods that will save you money year on year.

A few years back I worked for a company that supplied pressure control systems to the oil and gas industry.

It all started off with some very expensive Inconel components that were getting scrapped at an alarming rate. It’s a very long story and I won’t bore you with the minutiae.

To cut the story short, the part was on a large WFL Machine Tool and me and a team of engineers studied the production method for several weeks before coming up with the answers.

There was a list a mile long of all the bullshit reasons why these parts were going wrong. The real answers were something totally different.

In fact the machine had been bumped more times than I’ve had hot dinners.

Now I’ve not had that many hot dinners because my mother was always playing bingo and couldn’t be arsed to cook.

Mind you she could sling a mean bag of crisps at you. Oh, and her pot noodles were amazing, so long as we didn’t mind boiling the kettle and adding the water yourself.

We considered this a small price to pay for an otherwise nutritious meal.

Anyway, we asked the operators, in a meeting, how many times the machine was bumped.

“No, no probably not even every month” was the final answer.

Not happy with this we monitored the machine and kept a log of everything. Turns out the machine was getting minor shunts all day long and bigger bumps at least every week.

We analysed all these “little accidents” and almost eliminated the problem through good training and creating an open honest environment where the operators felt comfortable, honestly reporting any problems or collisions.

Virtually no bumps a bit like these posh women you see with Range Rovers. I mean you see these Range Rovers on TOP GEAR and they can climb up a fuckin mountain upside down at 90mph.

As soon as you meet one of these on a country road guess what? They won’t even move over into a puddle for fear of wetting the fuckin tyres.

These bastards should be banned from the roads a complete waste of space.

Oh, and don’t think I’m envious. I don’t want to drive around in a luxury vehicle with every creature comfort known to man at my fingertips. With beautiful leather interior. Music softly tinkling from the top-quality high end hi fi system.

0 to 60 quicker than a fuckin snow leopard. Room for the family and two dogs. Quietly purring through the rolling countryside. 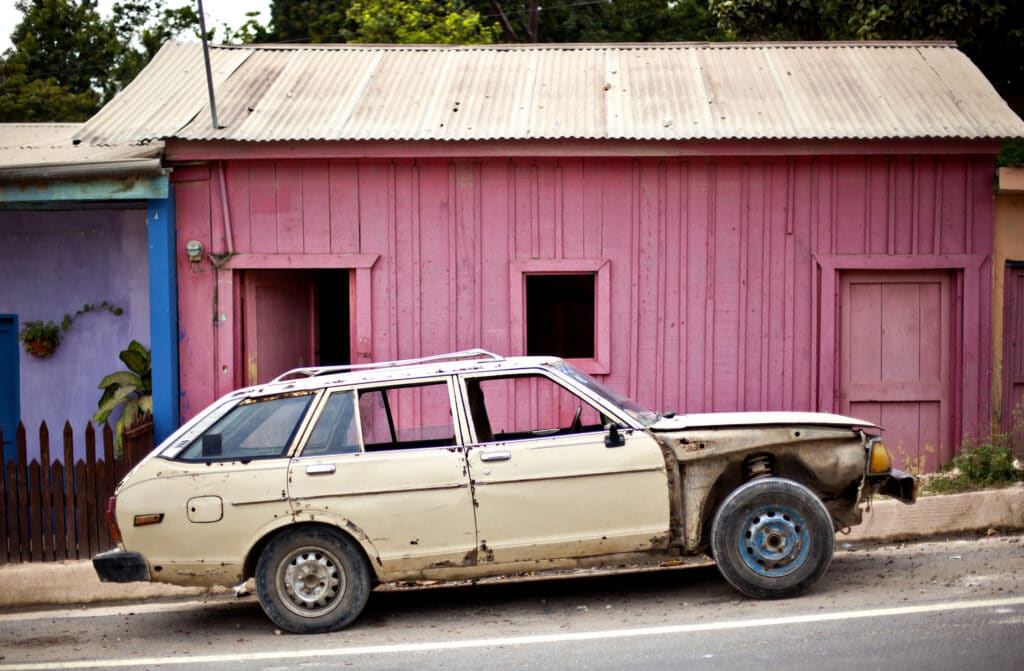 Fuck off I’ll stick with my car thanks very much. It has everything I need. A bit of a tidy up that’s all it needs.

Anyway, Here’s What We Did

What I’m about to tell you wouldn’t be practical in most companies. You must bear in mind that the cycle time for these parts was around eight hours and the material cost alone would constitute a decent lottery win.

In The Event Of A Collision

This job had some massive ups and downs but the final outcome was a massive success. It all came down to basic engineering principles. By carefully scrutinising the problem and systematically eliminating each error.

Making permanent changes to working practices so that the lessons learnt could be implemented all over the company.

The guys I worked with are still in touch and we earned massive respect for one another.

At the beginning when one of them told me he was a black belt I kept thinking he would beat the shit out of me if I upset him.

Turns out it was a six-sigma black belt and this is quite benign in terms of physical fighting skills. 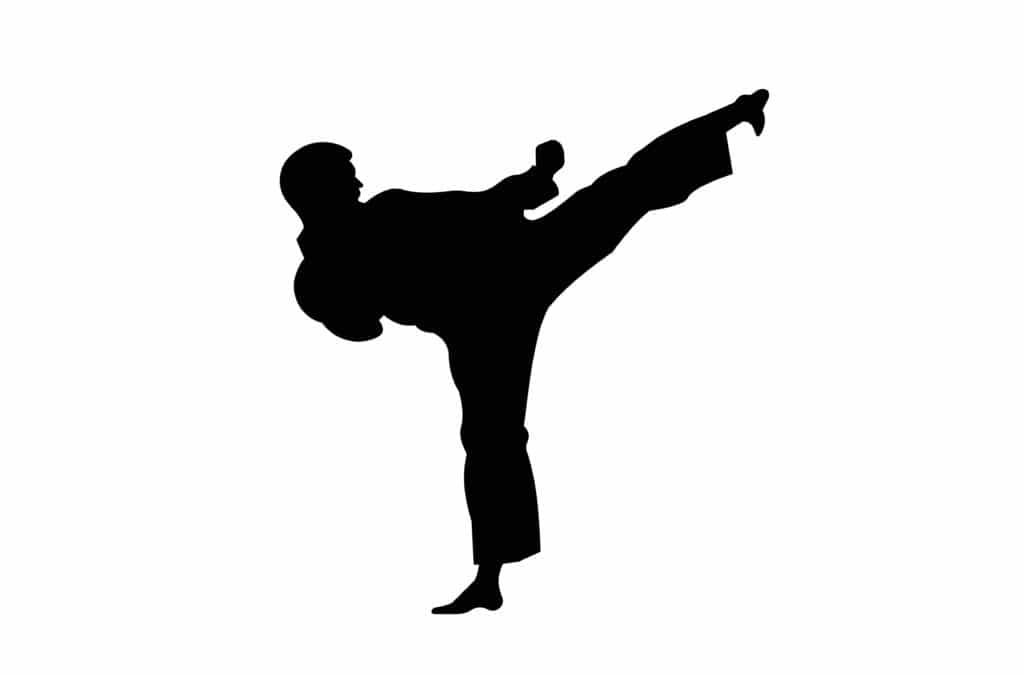 Everyone who knows me knows that my approach is very pragmatic, that’s no bullshit to the less articulate.

I would agree pretending I knew exactly what they meant.

Unfortunately, I don’t usually have a name for what I want to do.

You know the sort of thing; an untidy workshop I call a fuckin shithole.

I said “you’ll need about sixty S’s to clean up this horrendous crap hole”. 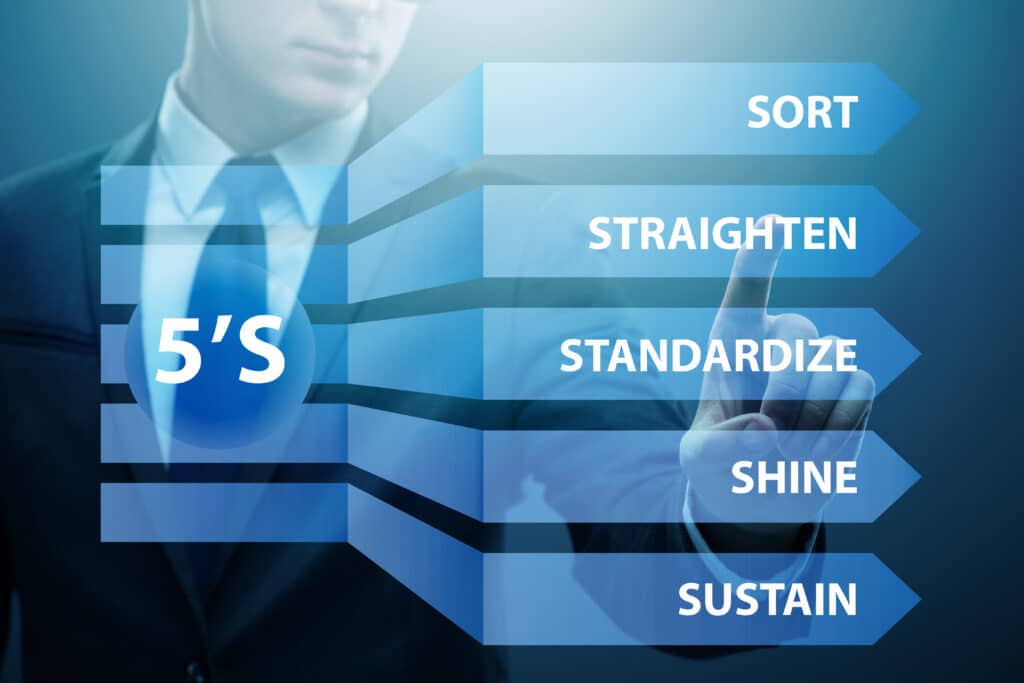 We concluded between us that what they had learnt in college and on courses gaining black belts and all sorts of stuff. I had picked up from working in the real world with real people. Putting the two together made a winning combination.

I still can’t see the point in a black belt unless you get to beat the fuck out of someone but I think maybe I’ve seen too many Bond movies.

I am sure you have noticed that more time is lost during set-up time than at any other time in your component life-cycle.
Very often a company will ask me to look at the cycle times on components. On close inspection most of their time is lost during the set-up process.

I may be in a company training programmers or machine training but I will poke my nose into everything and maybe suggest that we take a look at CNC Productivity Improvements.

Manufacturing in the UK is tending to move towards lower batch quantity due to lower production costs aboard. We are moving more and more towards low volume high quality parts. This means CNC Productivity Improvements are desperately needed because a much larger percentage of manufacturing time is concentrated on set-up times.

If you are only making six parts you can almost guarantee that the CNC set up time will be where all the time is used up. If you can’t guarantee repeat business then I am afraid it gets worse.
Unfortunately we rarely have the situation as it was in the past. We could spend months refining production methods to recoup it all when the job went into production for five years CNC set up time is then amortised.

The problem is when we are setting our CNC Machine we tend to lose control. Predicted CNC set-up times are not met or even worse we didn’t know what they were in the first place.

You may have already machined a very similar part so this will make quoting easy.

The methods we employ at The CNC Training Centre are rules for life. Take a look at this video on how to set a vice without clocking it. This is a classic example of something that, once it is implemented, is the gift that keeps on giving and that’s what we want. 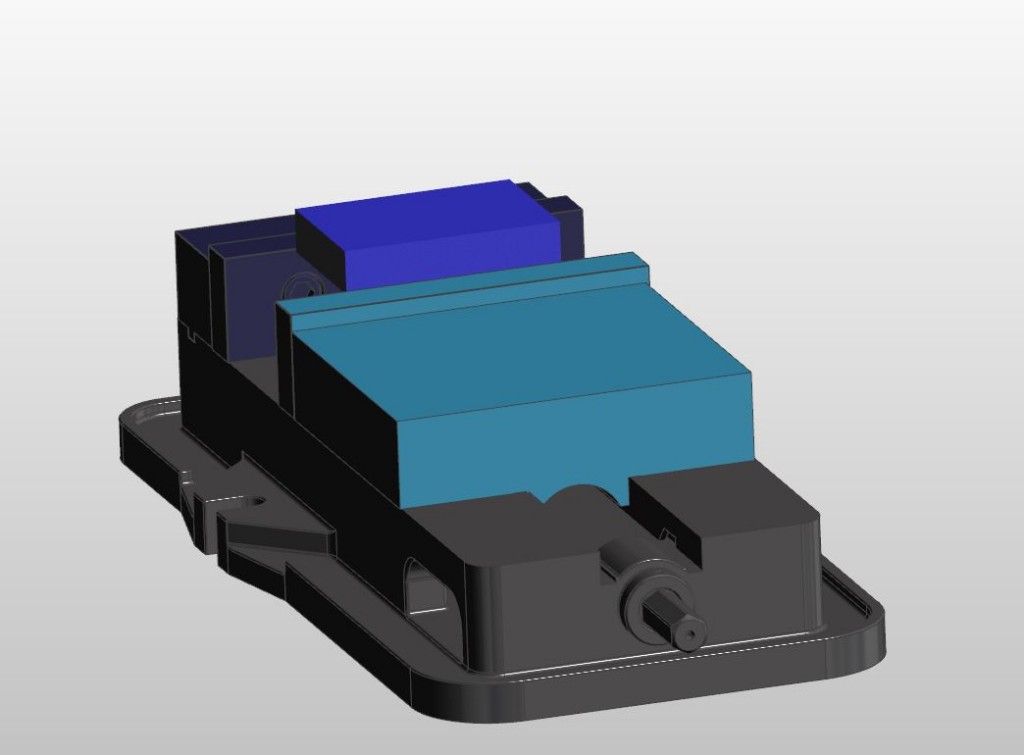 The way you set a CNC component is crucial.

Does the following Sound Familiar:

Everything goes great, set job on CNC Machine really fast and in no time, we get a part into inspection.

Just need a pass off and away we go.

Inspector “everything is ok just a few adjustments”
A week later we are still adjusting. 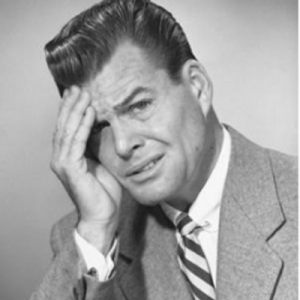 So, what went wrong?

My guess would be:

This can be taught and it can be written into an SOP (Standard Operating Procedure) which can be used again and again.
It sounds perverse but I would be suspicious of anyone who sets a job on a CNC Machine too quickly.

My pet hate (and you have loads when you get to my age) is when supervisors blame setter operators for long set-up times. “You’re the boss mate what are you doing about it?”

If you ask someone, and I frequently do, why it took so long to set a job. They can never tell you. But if you look carefully you will find that most of the wasted time is looking for things.

Also it’s not actually his fault so you just fired him when you should have resigned yourself.

I want to bolt down my vice.

Question: Where is the vice?
Answer: Under the bench somewhere. (5 minutes)

Question: Is it clean?
Answer: No fuckin way I even had to stone some dents out of the bottom. (10 minutes)

Question:  Where are all the rags?
Answer: Dunno mate go and get some more form the stores. (6 minutes)

Question: We got any tee nuts?
Answer: Go and ask Tom (15 minutes), oh and he told me about his cats hernia operation and gender transformation.

Question: These tee nuts don’t fit, do you know what size they are?
Answer: Go and ask Tom (10 minutes)

Question: Is this vice far enough over on the table?
Answer: No the machine just over travelled you’ll have to start again. (10 minutes)

This took nearly an hour. Then the boss comes down and really pisses you off cos he wants to know when the job will be off the machine.
I am doing my absolute best but everything is going wrong. The thing is this is all the bosses fault. Now I have an attitude problem to boot.

What you should do:

Maybe you need to check out the story of “King Rollo’s Playroom” before he made some CNC Productivity Improvements.

I will summarise it for those who were deprived of this story as children. In a nut shell he refuses to tidy his play room but then finds that he is tripping over his toys and breaking them and he can’t find anything either.

Not to spoil the story but King Rollo gets really fucked off about breaking his toys and does the right thing and tidies up.
Sound familiar this could be you folks. 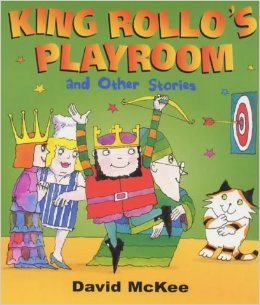 Everyone Wants To Work in a Clean Workshop

If you came to my front door in muddy boots and I open the door and you see a pristine immaculate house carpeted in white. What do you do?

You remove your shoes.

But if I opened the door and the house was filthy with straw on the floor you would probably want to wipe your feet on the way out.
The point of this is that if you’re environment is immaculate, anyone coming into it will feel obliged to conform and if they don’t they will stick out like your dirty boot mark on my white carpet. 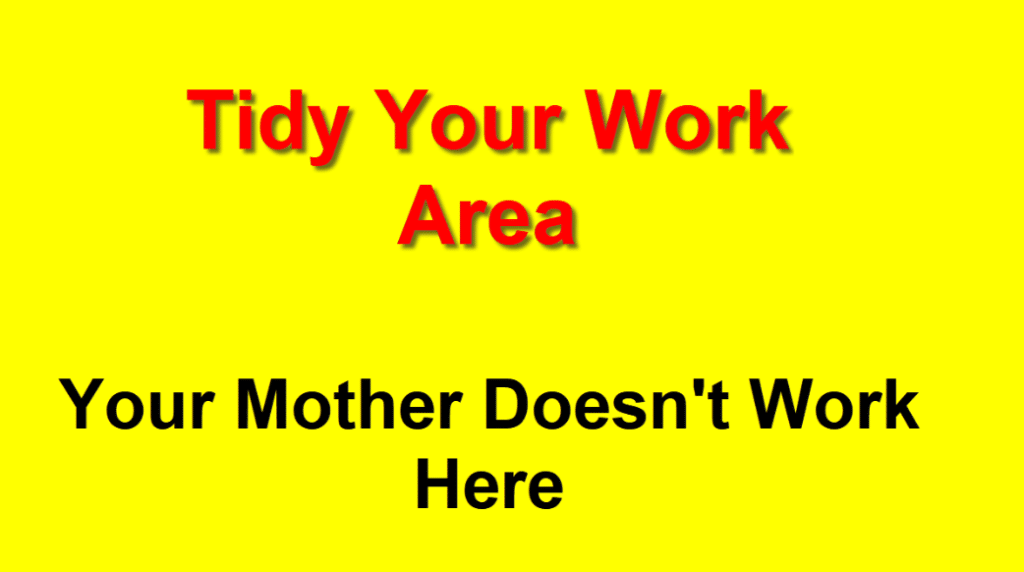 Companies very often invest hundreds of thousands in machine tools but refuse to buy more than one 19mm spanner when the operators keep losing them. Daft, you might say, but I bet you are already thinking of similar things in your own company.

The beauty of an outsider doing all this for you (and I would say that) is that they can do all the things you wanted to do but never seem to have the time.

Typically, this is how The CNC Training Centre would help you with CNC Productivity Improvements.

Then we do it.

Most of this study involves little or no loss to production. The cost of implementation is usually very low as most of the savings are in very practical low-cost areas.
Costs may include:

You can expect to see massive reductions in set-up times but above all these times are consistent and predictable. This allows accurate future job costing. 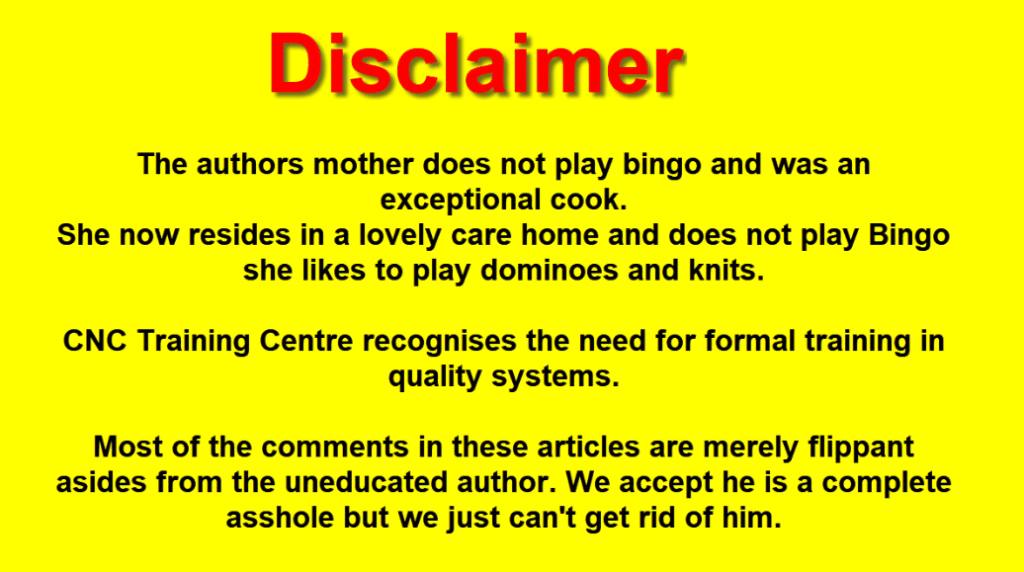 Please note no Range Rover drivers were injured or maimed in the production of this article.

I hope this article inspires you to improve things and get more productive.